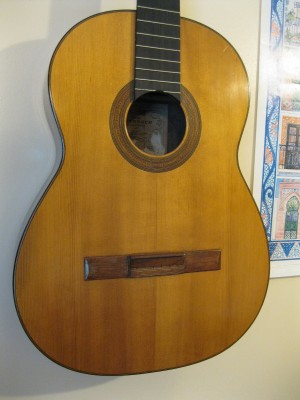 I am now finding that I "pre-sell" the majority of my guitars, certainly the vintage restoration Stellas and other guitars from the same era. Hence many, but not all of the guitars I have in stock are now listed on the website, in advance of restoration, or the stage where I am still working on them. This "Pre-Order" arrangement has now worked well for a good number of years....buyers reserving guitars coming through the workshop, in advance of them being fully ready, without any formal or binding commitment, and I welcome, and thankfully receive a steady stream of enquiries.
Description

Harald Petersen moved to England from Denmark, and became a highly respected Classical Guitar Maker, based in Cumbria, but famously associated with, and selling many of his guitars through the Spanish Guitar Centre, established by Len Williams, father of John Williams, in 1952. After his death in 1969, his two sons continued making the same pattern of Petersen Concert Classical Guitar models, until I believe about 1984.

I have owned and sold previously a good number of Petersens. I know a number of good players who have collected Petersen Guitars and, from discussion with them, it is clear that they have a strong appreciation for their qualities, and that of the the three standard models, in ascending order of quality, A, B & C, some owners have suggested to me that their preferred option is the model B.

The dimensions of the 1966 instrument appear to be quite traditional, with 652mm./25.75" scale and full width fingerboard, 51.5mm./2.03" at the nut, on a reasonably shallow, slightly "D" profile neck. The high quality of the construction detailing should be apparent in the photos, with handsome black-edged 5-ply to the top & triple binding to the back, both with side inlay stripes, to match back centre stripe, end stripe, intricate inlayed soundhole Rosette, stripe inlays to the Rosewood bridge. The top is Spruce, and the back and sides Rosewood, both very nicely grained and book-matched. Details of the other Petersens mentioned available on request.

The Alhambra 3C appears to be all original, including the internal label, which was probably originally dated, but the date stamp is no longer visible. The very similar guitar I sold recently had a 1973 date stamp, but this one appears to be a shade earlier, and Alhambra say that it is an early model, made between 1965, when they commenced production, and 1972. It has beautifully coloured and grain patterned Solid Cedar top, including "Bearclaw" type markings, which originally suggested to me that the top was Spruce, but Alhambra say that it is Cedar.

The Herringbone inlay Soundhole Ring is beautifully intricate, and the top has restrained light Walnut edged and black binding. The equally restrained headstock has Mahogany facing. Back and sides, which Alhambra confirmed as being Solid Mahogany, as they were not using laminated during this period, are a deep, rich, dark-stained colouring, again offset by the Walnut binding.

Dimensionally, the guitar is of typical full-size Classical proportions with a standard width fingerboard for a Classical Guitar of 52.5mm. at the nut, but a Scale Length of 652mm.
Condition

Individual condition report and repair/restoration schedules can be supplied for each of the guitars mentioned, on request.

All are original condition, except where renewals have or will be essential in course of restoration....finish & colour are likely to find on any guitars of this type, ranging between 50 & 75 years old - inevitably there is play & age wear and minor surface chips/scratches...in the main, really the minimum for vintage instruments of this type and age. I hope that you will agree that the photos show that these remain handsome & characterful vintage guitars.

All the guitars are inspected in conjunction with the professional luthier I work with, in order to determine the schedule of restoration works required, whether it may include a neck reset or the need to re-level the fingerboard, on which if we cannot avoid losing the painted position markings, we do have stencils in order to replace them, or alternatives to install dot markers, etc. to retain the character of guitar as much as possible. Major jobs are carried out in the luthier's workshop, and the whole restoration completed under his supervision.
Action, strings & cases

Following whatever restoration/repair works are required on the individual guitar, on completion of the set-up adjustments we will be looking for a correct classical action of around 4mm. at the 12th. fret.

I usually fit strings from the La Bella Classical or Flamenco range.

There is usually no case (although the guitar will be well packed and securely boxed for posting), but I do have the odd period case, and may be able to supply one of the type these guitars originally came in, or alternatively I may be able to supply it with a virtually unused Hiscox Liteflite hardshell case. These cases of course do offer much superior protection to the guitar. I will be happy to advise whether I can marry the guitar to a suitable case, at the time of purchase, and if so agree with you an inclusive price for Guitar + Case.
Contact us about this guitar

I recently came across the embedded YouTube clip entitled "Tenderly - Fingerstyle guitar arrangement" by Marcus Ford, decribed as "A short arrangement of Tenderly (Walter Gross) performed by Scottish guitarist Marcus Ford.
Guitar: Harold Petersen Classical Circa 1960." after previously having failed to find any clips recorded on a Petersen guitar, or a vintage Alhambra, so glad to find one at least, at last!