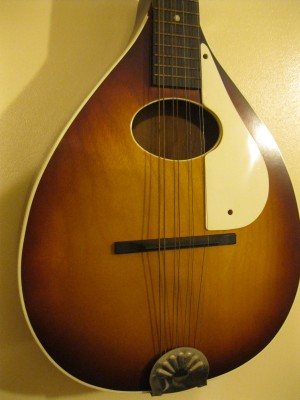 Selection of "Restoration to be Completed" Vintage Harmony Stella Mandolins - fully restored prices indicated below or available on request - meantime, photos show the c.1969 "Teaburst" version (VTG1511) and one of the 1950s versions (VTG1479), both before start of restoration....the other 1950s example is the same as the latter, but with Cream-buttoned tuners.

Over the last several years now I have sold dozens of Harmony made Stella guitars, amongst many other vintage USA made guitars, but the Harmony Stellas have been the specialisation. They have ranged right through from 1940, when Harmony acquired the Stella name, right through to 1975, when Harmony ceased manufacture in Chicago.....Mainly 6 strings, but 12 strings whenever I could get decent ones, and likewise my other particular favourites the 4 string Tenors.

So now we have the Harmony & Stella Mandolins I have collected along the way! Don't see them very often over here, but I've now built up a little stock of 5, in as near mint condition as you will get, for instruments of this age & type! The three Stella models are described here....the two Harmony archtop & f-hole style models are on a separate page.

No Mandolin you can buy new now will come with the vintage character of an All Solid Birch made Stella, which you can buy, in such exceptionally good condition, for a price the equivalent to the cost of a new standard Eastman or Goldtone. Similarly the all solid Monterey archtop/f-hole type models, one all Birch, the other Spruce top, Birch back/sides, listed separately.
Description

These are exceptionally pristine vintage Stella Mandolins. The internal ink model number stamp is clearly visible on two of them, but the usual corresponding date stamps cannot be seen. Knowing that Harmony produced these Mandolins until at least 1970, and that on their guitars they only started to fit tuner bushings in around 1969, I'm assuming that the later "Teaburst" finish one dates from around that year.

.....clearly the "Blue Book" had not logged that for most of it's life the model had the usual dark "Tiger Stripe" Harmony Stella finish, and I assume that "Red-stained Mahogany finish" now translates as "Teaburst"!

Judging by the style of the Stella headstock name logo, I believe that the two earlier versions, bearing the darker livery, would date from the 1950s.
Condition

The condition of these 50+ year old Mandolins is really exceptionally good....minor good honest wear....plus the odd small mark that there is is very minor indeed! However, as I always do, I have will be checking them over in conjunction with the professional luthier (and highly regarded builder of both guitars & mandolins), and all restoration work needed will be done, much of it in his workshop, but under his supervision throughout.

However, the later "Teaburst" (VTG1511) version has already been inspected, and it is clear that there are no issues with it at all. It appears that it has hardly been played at since new....no play wear to the original brass frets, or the dyed Maple fingerboard. The original ebonised floating bridge and chromed tailpiece are like new, as are the four-a-side tuners.

The photos included show it before final cleaning of the fingerboard, minor adjustment to correctly position the original nut, stringing up & setup, but I hope that you will agree that they show that it remains a really handsome and characterful vintage mandolin!

I will add details of the older two, 1950s examples, and the work to be completed to restore them, following the inspection.
Action, strings & cases

On completion of the restoration of the other two mandolins, we will be looking for a similar action set-up, and re-stringing.

There is no case included, although I do have a couple of original covered fibreboard cases of the type originally with these mandolins. Alternatively, given notice, I could look into the question of whether it could be possible to locate a Hiscox Liteflite hardshell case. I will be pleased to see if I can marry the guitar to a suitable case, and adjust the invoice. If no case is required, it will be adequately packed/boxed for protection in transit, if posted.
Contact us about this guitar

The only clip of the Harmony Stella H331 Mandolin I've found so far is the the one I have embedded below, entitled
"1960s Stella mandolin - pass me not" by vintagemandolins.
Video